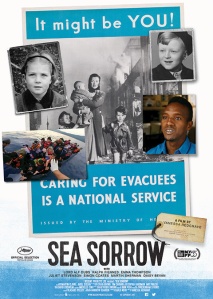 A small room with football scarves hung on the wall. Towels are placed on the floor facing East to facilitate prayers. We see the dark skinned faces of young men who will tell their histories. One is from Afghanistan and explains in what seems to be fluent Italian how he fled to Italy, losing several in his party when they fell to their deaths from a mountain. The other is a refugee from Guinea who speaks French. Both are already orphans.

We visit a demonstration for refugee rights, where some of the participants speak up for basic humanity. Many work in the film industry. At least two (Jemma Redgrave and Joely Richardson) are directly related to director Vanessa Redgrave. Redgrave herself appears a lot in this film, maybe a little too much. At one point she holds up a poster created by her granddaughter.

And yet the film never feels too sentimental, even if Redgrave’s appearances are sometimes a little clunky. When she compares her experience of being moved to relatives outside London during the Blitz to that of “internally displaced” persons today, you know what she means, but its really not the same. And yet this is so obviously a very personal project for her that you accept her right to keep popping up and making heartfelt pleas.

Besides which, she calls on contributions from other people. Playwright Martin Sherman relates his family’s experience fleeing Tsarist pogroms by foot until they reached Liverpool and took a boat to the US. He believes that “traumatizing” is too weak a word for what happened to them – their experience of flight shocked them and rendered them incapable of empathy in later life.

The star witness, though, is Labour Peer Alf Dubs. In older footage, Dubs takes us on a tour of the Jungle, the camp in Calais, where refugees are packed 4 to a small, cold tent. The Jungle was closed down, partly due to pressure from the Front Nationale, but no alternative accommodation was provided. Dubs explains, calmly, but authoritatively, that backing down to Fascists just makes them stronger.

He knows what he’s talking about. When Nazi Germany annexed Czechoslovakia, he was living in Prague, the son of s Jewish father, and only just managed to escape through the Kindertransport, This experience motivated him to push through the “Dubs amendment” affording similar rights to children in Calais who have relatives already living in Britain,

Amazingly the British government initially voted this tiny measure down. Even after the amendment finally got passed, not a single child could enter the country in the first four months. Dubs clearly expresses his despair of governments but also his faith in social movements which finally managed to enforce the arrival of most of the kids (although the situation for adults is even grimmer).

A letter is produced from a British newspaper in 1938 around the time of Kristallnacht. The writer, voiced by Emma Thompson, expresses her dismay at the reluctance of the British government to accept fleeing children, even in such desperate times. It is a remarkably eloquent letter, and the writer’s name is only revealed at the end to be that of Sylvia Pankhurst.

There is also some drama, with a piece on refugee rights from Thomas More attributed to Shakespeare. Later Ralph Fiennes dons doublet and hose to give us Prospero’s speech from the Tempest about how he and the infant Miranda were driven out of Milan and forced to flee in a small unsteady boat through dangerous waters.

The format contains a lot of chopping and changing, which hasn’t pleased all critics. And certainly the film sometimes displays the shakiness of a first-time director, even if said director is now in her eighties. When Redgrave appears on camera with film of refugees rolling in the background, the production values are rudimentary, but even so this film is more capable of evoking emotion than any Hollywood Megablockbuster.

I do feel that this is a little too much a film “about” refugees, who don’t get enough time to express themselves, but because of the historical dimension this is less serious than it could have been. The subject is more a universal refugee who has been fleeing war and persecution for decades and generally been beneficial to his or her new homeland. Most importantly, refugees are never treated as being as any less than living and breathing people.

There is maybe a little too much hope entrusted in the United Nations and Eleanor Roosevelt, which suggests that the one time Workers Revolutionary Party firebrand may be getting a little mellower in her old age. But if its not the film that you – or I – would have made, we should go out and make a better one, Although this may not be as easy as that. In the Q&A afterwards, Redgrave explained how difficult to gain funding, and though the film is dated 2017 it still hasn’t seen general release.

For the second film running (after last night’s Murder of Fred Hampton), here is a film who’s righteousness makes up for any lack of polish. It is a film that needed to be made, and hopefully it can soon find a much wider audience than it has so far.