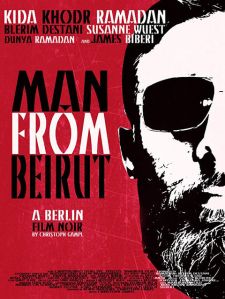 A housing block in Berlin. Two men arrive in a car. One stays outside, while the other puts on a baseball cap above his dark glasses and beard and goes into one of the flats. He is carrying the sort of box used to deliver hot food. When a man answers the door, he hands over the box and shoots him dead. As a woman descends the stairs he hides in a closet. When she tries to open the closet door, he shoots her too.

Suddenly there is a flurry in the corner of the room. There’s a third person there, but it’s a little girl. The man – let’s call him Momo because that’s his name – isn’t the sort of person who shoots little girls. So he takes her with her and bundles her into the car. When his mate asks him what he’s planning to do with her, he says he’ll think of something. For the moment, just shut up and drive.

It becomes increasingly obvious that Momo isn’t wearing dark glasses because of a youthful infatuation with Miami Vice. He is, actually, blind, although he has the sense perception of someone who’s not been able to see for quite a long time. So, his blindness doesn’t seem to get much in the way of the day job.

Momo goes on the run with the girl, Junah. They first visit the house of a friend, then a hotel. Junah becomes Momo’s eyes and he looks after Junah the best he can. They slowly bond, though we get no real explanation of why she so suddenly develops an attachment with the man she just saw kill her aunt and the aunt’s partner. Maybe she didn’t get on with her family that well.

As all this is going on, there’s a new hitwoman in town. Blonde and slightly built, she speaks in English and German with her various associates. She’s been given photographs of Momo, Junah and Momo’s mate and has been told to track them down. For some gratuitous reason, she is confronted in a toilet by one of the people she’s working with and told to strip.

Before I go into my criticisms, let’s be clear. Watching this is worth an hour and a half of anyone’s time. It’s stylishly shot, looks great, and the characters are all engaging enough that you don’t really notice that the plot is flimsy and not really credible. You go with it anyway, so do give it a go. Having said this, I do have a number of issues.

Firstly, it contains so many film tropes that at times it’s like watching something written in a second language. There are all sorts of things dropped in that don’t add anything to the plot, but seem to be there because director Christoph Gampl saw them in a different film. For example, every so often, we see a shot of crashing waves. Is this supposed to mean anything or just to look good?

If Man from Beirut had been released a few years ago, you’d think that filming it in black and white was somehow innovative. But I’ve seen so many monochrome films that were released this year, that it’s no longer anything new. It feels more like a gimmick that doesn’t actually add anything to the film. Similarly the 4:3 aspect ratio. In The Lighthouse, this added to the claustrophobic feel of the very intense film. Here, it just seems to be drawing unnecessary attention to itself.

Then there’s the unusual camera angles, which you can forgive a little, especially the impressive overhead shots of night traffic, but it has all done before. Speaking of which: a film about a hitman and a little girl? This is so specific that you cannot help but think of Léon. Which means that you’re always thinking less about the relationship between Momo and Junah than the fact that they’re not Jean Reno and Natalie Portman.

This is a shame, as there are aspects of the film that are rarely seen on-screen. Other films may have tried a blind action here (Daredevil, for example), but very few genre films are set in the Lebanese-Turkish communities of late-night off licences and endless card games. This means that a variety of languages is used in the film, which reflects modern Berlin much better than your average monolingual Hollywood product.

But the film clichés pop up with depressing regularity. This sort of thing doesn’t ruin the film, but it is distracting. Ultimately, there is enough in there to enjoy, and it is all pulled off with a certain elegance. But the tendency to jump up and shout “me, me me” and draw attention to how clever (it thinks) it is becomes slightly tiresome. Go see it and enjoy the good bits, but try to excuse the youthful self-regard.