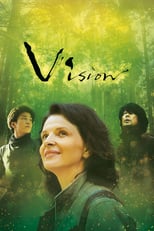 Not the film I’d been planning to see, but Sunday transport service. It was one I’d had my eye on though, as apparently its Juliette Binoche’s first English language film. Though she does speak a bit of French at the beginning, and I’m pretty sure a bit of German towards the end but i guess that’s just in the synchronized version. As the japanese people were speaking German to each other she was probably speaking Japanese. So its all a bit of a mindfuck before you get started.

And what happens? Good question. There’s a lot of long shots of autumnal forests and sunsets while Juliette bangs on about love being like waves. In fact it all has a bit of an air of a motivational poster.

Then there’s the theory that circadas only appear at prime number intervals, the blind woman who goes missing and the notebook which contains the equation 1000°C -> Vision -> Pain.

On top of that a load of spiritual sayings which start off sounding vacuous and get less profound the more you think of them.

All in all, a heap load of batshit crazy. And not in a good way