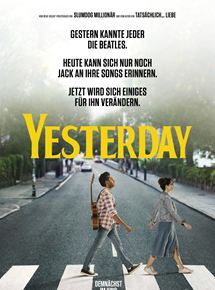 The question was always going to be, is this Danny Boyle’s Yesterday (yay!) or Richard Curtis’s (oh dear). The answer is that its a bit of both.

It has Boyle’s ear for music (with a couple of dishonourable exceptions, of which more later) and his eye for a good scene, even if we’re a world away from the worst toilet in Scotland and babies on the ceiling. It also has sympathetic characters who we don’t mind rooting for.

Yet it also has Curtis’s cloying sentimentality, and “difficult” romantic triangles, which somehow resolve themselves without anyone getting angry or even seeming very bothered. It has exactly the amount of danger and edge that you’d expect from a Richard Curtis film, which is none whatsoever.

This is a film which feigns anti-corporatism while starring Ed Sheeran and James Cordon “as themselves” and leads up to a big stadium scene with everyone holding their lit mobile phones up in the air without a single trace of irony.

Often the thing that keeps it going is the stunning soundtrack, but then again the Beatles produced a body of work which, if not the greatest ever, at the very least lends itself to being covered by nearly anyone, even him off EastEnders (who acquits himself well). But even here, it isn’t the subversive Beatles we see, but the ones its ok to play to your grandparents.

I wasn’t expecting them to break into Revolution #9, but it would have been nice to hear one of the melancholy ones like For No-One. But even Yesterday isn’t played as a sad song (sadness is banned in Curtis films) but as a classic which just happens to have been written in a minor key. Similarly, a What The Fuck moment which refers to John Lennon does not bring up the supporter of Irish Republicanism who hung around with the International Marxist Group, but the harmless old hippy issuing platitudes about love being all you need.

And if you have the pick of the songsheet written by arguably the best songwriting partnership in the world, what are you going to play at the romantic denouement? (this is not a plot spoiler. Richard Curtis films are required to have a romantic denouement). Why only something trite by Ed Sheeran. You’ve gone a long way from Lust for Life and Perfect Day, Danny.

By the way, while we’re on the subject, Sheeran’s acting is actually better that we have any right to expect (shame you can’t say the same about his songwriting). And there are other performances worth watching, You can’t fully dismiss anything that has Sanjeev Bhaskar and Meera Syal playing, well, the same pair of characters that they’ve played for decades. Its also good to know that Sarah Lancashire is still out there, even though her role was somewhat peripheral.

Look, you’re going to have to go and see it, aren’t you, so you may as well. The plot is, of course, preposterous, but it stays true to its own ridiculous logic. And it could have been much worse. But its no Trainspotting. Its not even Trainspotting 2.