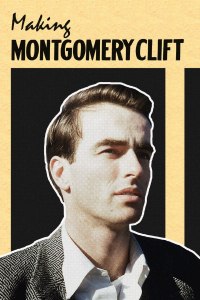 Early on in the film, quite possibly before the opening credits, director Robert Anderson Clift says “my uncle was Montgomery Clift. To half the people watching, this will mean nothing”. This statement captures a danger encountered by the film which it never fully resolves. How best to tell the story of a man who was ranked alongside James Dean and Marlon Brando, lauded by The Clash in The Right Profile, but is now largely unknown outside the cognoscenti?

A simple answer would be just to show us the films, and this is indeed how Making Montgomery Clift starts. We hear about his early days as a teenage star in theatre, resisting work in Hollywood until starring in a Western in his late 20s. In that film he personified a new type of star – sensitive and gentle in contrast to his brutish co-star John Wayne.

Clift was in such demand that he could pick and choose the films that he starred in, turning down leading roles in Bridge on the River Kwai, On the Waterfront, East of Eden and Sunset Boulevard. This is portrayed as canniness on his part, not letting him be tied down to a contract committing himself to several films at the same studio. At the same time, you can’t help thinking that had he played Terry Malloy or Caleb Trask his legacy may have been stronger in the public consciousness.

In its description of Clift’s early career, the film is workmanlike if not spectacular, but then it goes seriously off piste. It seems that Clift junior has serious issues with two biographies of his uncle. Much of the film is spent on showing where he thinks these books were wrong, Now, just stop one minute to remember his opening remarks. Maybe half the audience has never heard of Montgomery Clift. Much fewer have read these 40-year old books and even fewer really care what was in them.

The first book, written by Robert LaGuardia, is dismissed as having a Freud-influenced obsession with Clift’s relationship with his mother, and concentrating on gossip rather than celebrating his career. Which may well be true, but LaGuardia is not the only guilty party here. There is a long scene in the film where the director and his brother reminisce asking Montgomery whether he’d slept with Marilyn Monroe and Elizabeth Taylor, giggling like the teenagers they were when they first had the conversation.

Quite a few less famous relatives have starring roles in Montgomery’s biography. There is a lengthy diversion about his brother, Robert’s father, Brooks Clift. We see boxes and boxes of recordings that Brooks made of all his phone conversations and much more. We learn way more about his war experiences than we really need to in a film which is not supposed to be about him.

Brooks had a serious falling out with Patricia Bosworth, the second featured biographer. Initially he saw her as an opportunity to refute the mistakes he saw in LaGuardia’s book, and spent large amounts of time talking to her. Brooks is now dead, but we have plenty of taped material showing his anger that much of the information that he shared with Bosworth was falsely reported or simply ignored.

The style of the film reminds me of an ex-girlfriend who used to go on at length about a former boyfriend of hers, pausing regularly to ask me to agree with what she was saying. Now I’d never met the bloke, and I was convinced that she really believed that he’d behaved as she said, but I’d have much preferred to hear what he had to say before making a final judgemnt.

And here’s the thing – the film makers have exactly this opportunity. Bosworth is interviewed at length, but is never confronted with the many accusations that are levelled against her. Now I’m not saying that the accusations are false, but they would be much more convincing if we weren’t expected to accept them, just because we’ve seen them on screen.

This is a recurring problem. We are told that reports that Clift was insecure about his homosexuality or that his self-confidence took a nosedive after a disfiguring car crash are the result of malicious gossip. Yet we are provided no proof either way, meaning that the rebuttals are no more credible than the original claims. And let me repeat – the directors are working under assumption that half their audience have never even heard of Clift, let alone the intricacies of these disputes.

The Making of Montgomery Clift is not a bad film – Clift’s life and career are way too interesting for this to be possible – but it could have been much much better. I think that the main problem is that the director is just too close to the subject. I lost count of the number of times we hear the word “I” and “my” which just makes the claims made thoroughly subjective and unreliable. Robert Clift has too much skin in the game.

Apparently every few years someone proposes a proper biopic. Maybe soon they’ll actually get a film made which would contain what’s missing here.