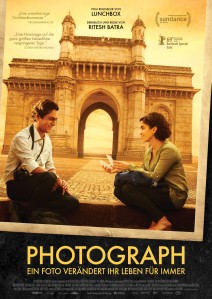 Here’s the plot as far as it goes. Rafi, a poor street photographer in Mumbai takes a photo of Miloni, who is training to be a chartered accountant. When Rafi’s grandmother stops taking her medication until he finds himself a wife, Rafi sends her the photo claiming marriage is just around the corner. But the grandmother wants to see the putative bride so arranges a visit to Mumbai. Rafi is forced to find Miloni and get her to collude in his subterfuge.

So a typical set up for a romantic comedy where we’re asked to ignore the implausibility and just sit back and wait for the high jinx to come. Except that the jinx could barely be lower. Miloni does nothing to dispel the myth that chartered accountants don’t lead the most interesting of lives, and Rafi doesn’t have much to say either. The domineering grannie is played for laughs, or would be if she actually did anything that was funny. Instead you just wonder why they let her have so much influence in their lives.

Rafi shares a house with a group of other men and a ghost. Yes, its that sort of film. They talk to each other without exchanging any opinions or saying anything remotely memorable. Rafi and Miloni also spend a lot of time drinking tea together, and that’s about as intimate, or as interesting as it gets.

There’s a scene where they’re in a taxi while the driver is prattling on about nothing and keeps turning back to look at them while they’re telling him to keep his eyes on the road and just shut up. Well, that was me for most of the film.

I didn’t feel any great empathy of any of the characters and nothing that they had to say was of any real interest. And most of the things that they did which moved the plot along were done off camera. Which is a shame, as apparently the film had profound things to say about class and religious antagonisms if you believe the advertising copy.

I think I sort of get what the film was trying to do – to show a romance in which the key characters are introverts and not your traditional Hollywood (or Bollywood) romantic leads. Which is fair enough, but you need to give them some sort of character. In one of the last lines of the film someone says something like “films all have the same plot nowadays”, setting up the stall for “Photograph” as something subversive. To which my immediate reaction was “yeah, but at least they have a plot.”

This may not be them but me. There were people in the cinema (including the woman next to me) who seemed to be enjoying themselves and were laughing at bits that I found just unintelligible. If spending nearly two hours trying to keep abreast of what exactly happening and why, feel free. But sometimes you just feel the need for a car chase to break up the tedium.