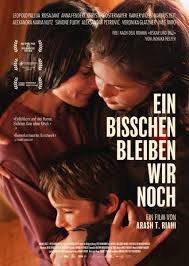 A boy and a girl are walking down a rail track. He is smaller, wide eyed and enthusiastically hopeful. She is more taciturn, but listens to him prattling along. We learn that they are called Oskar and Lilli, though she used to be called Leila and has changed her name to “integrate” better. They are siblings – refugees from Chechenya who have been living in Austria for 6 years.

Cut to a block of flats in Vienna. Oskar and Lilli are alone in the flat when the police storm in, asking for their mother. She’s not there at the moment, and the kids dread being deported to somewhere where they don’t know anyone and barely speak the language. The mother returns home and hides from the police in the bathroom. As a way of saving her kids, she slits her wrists.

In all the chaos, Oskar and Lilli escape to the roof, where they evade the cops for the moment at least. But they need to eat and are eventually rounded up into some sort of home for refugee kids. This is where they’re told that they’ve been fostered out – Lilli to a woman in Vienna, and Oskar to a pair of teachers who live an hour away. The pair flees once more, tying their shoelaces together, but they can’t escape.

Oskar only ever refers to his new guardians as Der Lehrer and Die Lehrerin. They are well-meaning but self-satisfied – congratulating themselves on their act of charity. They use public transport to save the environment and run a vegetarian household, though Oskar catches her sneaking a bite of sausage on a trip to the supermarket. You would applaud their social conscience if they weren’t so smug about it.

He is beardy and plays a makepiece accordion at any available opportunity. She is starting to crack up – unable to properly look after her other young son and his ageing mother, who has Parkinsons and regularly shakes (or as Oskar says, dances without music). Oskar develops a conspiratorial relationship with the old woman and pays her the attention that her family stopped giving years ago.

Meanwhile, despite some initial reticence, Lilli starts to get on well with her new foster mother, less so with her partner, a photographer who fears that Lilli is cramping his style. Lilli is sullen and moody, as befits a teenage girl, but has occasional moments of joy. But then she has nightmares her bombed out life in Chechenya, which results in her wetting her bed.

Oskar and Lilli regain contact and conspire to find their mother. The ever-optimistic Oskar believes that she will be waiting for them in their old home. Though when they finally find her – following a tip off from the photographer who sees this as a chance of getting shot of Lilli – she is helpless, probably drugged up on hospital medication, and unable to recognise them.

This is an astounding study, not just of refugee children who are neglected by an uncaring system, but of these 2 specific characters. Although Oskar is much younger and smaller than his sister, he seems to be in charge, as he is in later scenes with his mother. He is also full of boundless optimism, and fashions his food, and anything else that comes to hand, into smiley faces. This leads him to misunderstand the uncaring world in which he lives, but it’s also what keeps him going.

Similarly, Lilli’s teenage moodiness does not prevent her from occasionally enjoying herself. She makes a friend, with whom she swaps cigarettes and enjoys the rides in the Pratergarten. There is one particular scene when Lilli has just heard some good news and is circling around on a ferris wheel when she looks blissfully content – happy, almost. Shortly afterwards, and somewhat inevitably, she feels betrayed by her friend and her foster mother, and contemplates suicide.

This is a sober film which has moments of ecstasy before reality keeps bursting in. For a moment, we feel that we’re heading for a happy ending, which would be unrealistic but something that the characters would deserve if there were any justice in the world. And even when the worst does happen, the film is still able to end with a moment of impressive defiance.

Most films with cute kids get bogged down in their own treacly sentimentality. Oskar and Lilli are both sympathetic characters without being moppets who are there to be patronised. They suffer the injustices brought by their situation, but they also resist. Ein Bißchen bleiben wir noch offers the face and heart of young refugees, and we need a lot more of that in today’s society. Surely one of the films of the year.