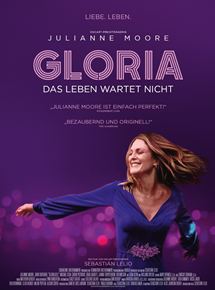 Gloria (Julianne Moore) has been divorced for 12 years, she thinks. Her son has a baby, and her pregnant daughter’s about to move to Sweden to marry her surfer boyfriend. When Gloria’s not at her shitty car insurance job, she frequents the local 70s disco or sings along with the bland MOR songs on the car radio (it takes you a while to realise that the film isn’t actually set in the 1970s).

At first, the songs that she listens to are about heartbreak and loneliness. As Gloria meets Albert (John Turtorro), an ex-marine who owns a paintball ranch, they start to get happier and livelier. As the film develops, Gloria and Albert fall in and out of love, presumably on the basis that if you’re going to lead bland and mundane lives, you may as well do it together.

Apart from that, nothing of interest happens. Nothing. No-one talks about anything interesting or does anything interesting. There is almost the start of a discussion about gun control, but just as it looks like someone may express an opinion, they agree to differ.

I guess at least the fights (which mainly consist of people seething silently) are slightly more interesting than the shared moments together. Albert reads aloud a dreadfully sentimental love poem from an anthology, which I guess is supposed to show his sensitivity, but the words are so cloying that you just hope it will be over soon.

Most of the time they do uninteresting things in Los Angeles. For a while, they go to Vegas. Towards the end, there is an Incident, which I guess is supposed to be interesting, but its really not all that.

It is, however, an ensemble piece. Its not just Gloria and Albert who are uninteresting – her kids are boring, her best friend is boring, her mother is boring and the Swedish surfer putative son-in-law is particularly boring. I guess we’re supposed to be interested in what happens to them, but its not easy.

The nearest we come to a plot is when Albert’s daughters incessantly ring him, leading him to break off any conversation and rush back to them. Or when Albert rushes away from any social situation, leading Gloria to row with him. And then get back together. Many times over. You’d have thought they’d have got the message eventually that they’re not exactly compatible.

I think the message is supposed to be that Gloria’s a Strong Independent Woman who’s not afraid of going to discos on her own (wow). And she enjoys dancing (double wow). Its a sign of how dangerous the film is that in the final scene, they play the song of her name. But its not the Patti Smith song, its Laura bloody Branigan.

Despite all this, it seems that critics almost unanimously seem to have loved this film. And I honestly don’t understand why. There are some films which are provocative so that while I hate them I can see what someone else would get from them. And then there is this safe, bland, unremarkable mush.

In case you missed the nuance, not my sort of thing. At all.