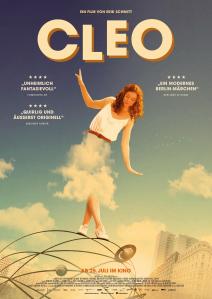 Cleo was born on the real 9/11 – 9th November 1989, when her parents’ car was stuck among the first people pouring through the berlin wall. Her mother died in labour.

Ten years later, while helping Cleo search for a clock that could turn back time, her father fatally detonated an unexploded bomb, leaving Cleo alone with her imaginary friends. At times like these it helps when your imaginary friends are Albert Einstein and Marlene Dietrich.

Cleo develops a set of rules to help her through life, which largely consist of not looking back, deep self-dependence and investing as little emotion as possible in other people. My sort of rules 🙂

This creates some difficulty in her job working for a sort of travel agents which offer safari tours showing tourists the hidden Berlin. She does her work diligently but draws the line at smiling at customers and actually going out on the tours is an absolute nono.

So, when a work colleague leaves and Cleo’s boss forces her to take a tour, it’s no real surprise that she doesn’t make it to the end – fleeing a tunnel which brings back traumatizing memories of her father’s death. She goes in search of Paul, who had earlier entered her office with a treasure map that could just lead her to the clock that turns back time.

Paul has designer stubble and is charming, but he talks too much and listens too little. He shows an increasing interest in wanting to dance with Cleo and getting to know her better – something she quite rightly rejects, telling him that they are not to be friends and forbidding him from asking her any personal questions. Also he comes across as being a little bit needy.

Nonetheless they continue in their treasure hunt, reining in a pair of dodgy (but sweet) blokes who have a professional interest in destroying things. After walking past a number of sites familiar to Berliners, though not necessarily on the tourist trail, they end up at Teufelsberg, the artificial mountain on top of a cold war observation centre, which in turn is on top of an old Nazi university.

There’s a whole lot going on here, and on all sorts of levels. On the one hand, the film is exactly what it says it us – a fairy story and a love letter to Berlin. There’s a very creative use of cartoons, lighting and plot, which gives the whole thing a very surreal atmosphere while maintaining it’s own internal logic.

At the same time, it has pretensions towards profundity. It starts with a quote from Heraclitus – as it happens the same one that’s used in Apocalypse Now – you can’t enter the same river twice, and ends with one from Marlene Dietrich – the one about if she lived her life again, she’d make all the same mistakes only sooner.

There’s also a point to all the stuff about turning back time. Cleo’s life is very sad, her isolation from society is very real, and she is troubled by the thought that her father’s life would have been happier if she had not been born and her mother had survived. Yet although she is sad she is never miserable, and it’s her indefatigability that holds the film together.

In short it’s a film that could very quickly irritate its audience by its knowingness and its sense of it’s own importance, but it kept me thoroughly entertained throughout. Even if for the second half of the film I was convinced that it was doomed to a sentimental ending.

Here’s the problem. Cleo is self-reliant from the start and in her dealings with the pretty but often drippy Paul, it’s clear who has the upper hand. But the film must resolve itself somehow, and Cleo’s life must be given some purpose. How to do this without submerging her life into a happy ever after relationship?

Let’s just put it this way. It does the best that it can, and Cleo remains in charge. And despite my cynical distaste for happy ends, I can’t remember any film in quite a while that has filled me with so much joy.

I’d definitely recommend going to see it, but have a feeling that it could be a divisive film, so if you can’t go with it, I did warn you. It’s on a lot of screens in berlin this week, so with a bit of luck it will transfer to other countries